Home » Blog » What is the Safe Distance Between Cars while Driving? 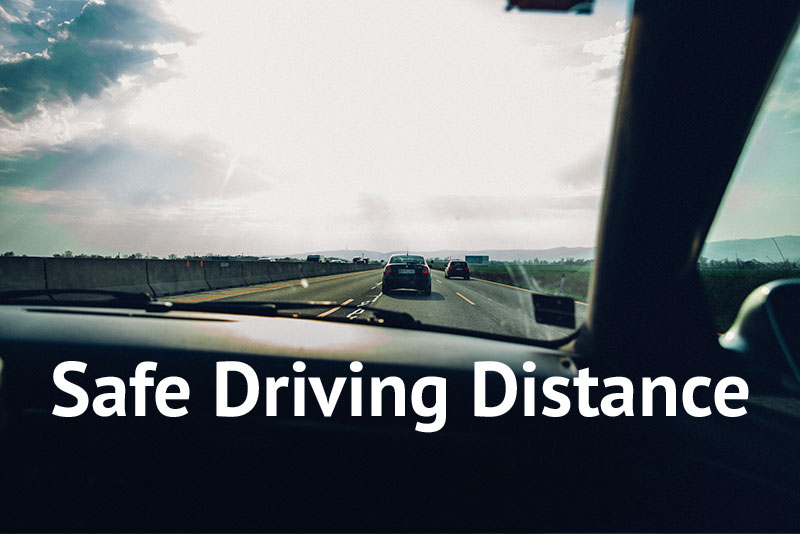 Whether you’re a new or experienced driver, it may be challenging to determine the safe distance between cars while driving. Most people use different tools or methods to avoid tailgating offenses and potential accidents, but they aren’t always effective.

The safe space between vehicles varies, depending on the driver’s training and understanding of tailgating. This vague description can make it nearly impossible for responsible drivers to maintain enough distance between themselves and other drivers since there are numerous factors to consider.

Nevertheless, you can use some tips and tricks to help you avoid tailgating and unwanted car accidents.

Although there’s no set-in-stone legal distance that cars need to maintain while on the road, tailgating is a genuine offense. But how do police officers determine whether you’re tailgating or not?

Tailgating occurs when a driver is getting too close to the driver in front of them. Tailgating does not allow drivers enough space to stop in the event of an emergency. A tailgating driver may crash into the back of the vehicle ahead of them if they don’t maintain proper stopping distance.

Police may pull over drivers that do not maintain a one-car or two-car distance while on fast roads like interstates or major highways. That’s because cars traveling at high speeds require more space and time to come to a full stop.

In short, the faster you drive, the more car lengths you should maintain between yourself the driver ahead of you. Otherwise, you may injure yourself and others when forced to stop or pull over to the roadside.

Car accident injuries can last for years after the accident, so it’s crucial to keep an appropriate distance between you and other drivers.

How Many Car Lengths Should You Leave Between Cars?

Answering this question can be tricky and for many reasons. Firstly, not all cars are the same length. A compact sedan might only be about 13 feet long, while a pick-up truck or SUV could be 17 feet in length. When you begin talking about semi-trucks and delivery vehicles, these measurements only grow.

Secondly, the proper amount of car lengths you should leave between cars often depends on your speed, the current weather conditions, and traffic. The faster you’re traveling, the longer it will take to make a complete stop. And if it’s raining heavily, the road may be slick. This slipperiness can make it more difficult for you to stop during an emergency.

Roadways flooded with cars and heavy traffic can be hazardous and difficult to navigate. Vehicles tend to bunch-up together as drivers become more impatient. One false move could set off a chain of accidents that only increases the traffic and the wait.

The best possible conditions for drivers are broad roads, sunny daytime hours, and little traffic. Slow speeds could also increase these conditions’ safety, though drivers must respect posted speed limits for this additional feature to work.

In general, it’s wise to keep as much distance between yourself and the car in front of you as you possibly can, especially when driving at high speeds or in inclement weather. Of course, in commercial or urban areas, this habit might not be practical or possible. When traveling through urban areas, you’ll likely want to keep at least a one or two-car distance.

How Far Should You Drive Behind a Truck?

Trucks come in many lengths, and the larger they are, the longer they take to make a full stop. As such, drivers must take extra care to keep a distance from large transport vehicles, like semi-trucks.

It may take a sedan about 250-300ft to make a full stop when traveling at higher speeds on an interstate or highway. A large transport vehicle may require 400ft or more. As such, a sedan could potentially crash into a semi-truck during the braking process, especially if the truck is incredibly long.

Drivers should keep a great distance between themselves and trucks, or they should switch lanes to avoid being directly behind them. A length of about 20 cars is appropriate for those traveling behind semi-trucks and transports vehicles.

How Many Car Lengths Is 2 Seconds?

The 2-second rule is one of the most popular strategies for maintaining an appropriate distance between your vehicle and the vehicle in front of you. However, the number of car lengths that two seconds represent varies depending on your speed.

If you’re driving a car at 55mph, you could reach a full stop in about 200ft, potentially less. That equates to the length of about 14 sedans or a dozen full-sized SUVs. When driving in heavy traffic or metropolitan areas, your vehicle should maintain at least one full car’s distance from the vehicle in front of it.

Should another vehicle behind you fail to stop, it will likely push your car forward. You can help protect other drivers by maintaining a safe distance from the vehicle in front of you. Even if you end up in a non-fault accident because of a driver behind you, safe distancing techniques can help you avoid hitting other drivers, passengers, or nearby pedestrians.

Consequently, “2 Seconds” could be 15ft at slow speeds. It could also be 300ft, particularly for drivers navigating fast-paced highways during rainy weather. Drivers must consistently gauge safe driving distance by referring to the current weather conditions and traffic status.

How Many Car Lengths to Stop at 70 Mph?

A car going 70mph could have a braking distance of about 250ft. This distance doesn’t reflect the time lost during the decision-making process. When a driver recognizes an immediate danger and decides to engage their vehicle’s brakes, several seconds may have already passed.

If the driver has maintained their current speed, they may have already traveled several dozen feet closer to the accident, vehicle, or danger. Consequently, a car traveling at 70mph may reach a full stop 300ft after the driver has noticed a potential threat.

The average sedan is about 15ft long, and an SUV isn’t too far behind at 16-17ft. As such, a car traveling at 70mph may need to keep an 18-19 car distance between vehicles in front of them to avoid an accidental collision. During rainy or snowy conditions, this distance increases. Slippery roads can hinder your vehicle’s ability to make a sudden, safe stop.

Knowing how much room to give the car in front of you is a crucial aspect of safe driving. Though there’s no legal distance that US drivers must maintain throughout all states, tailgating is a ticketable offense in many areas. Besides, keeping too close to the car ahead of you could result in a car accident.

The general rule of thumb is two seconds of distance between your vehicle and the one in front of you.

However, drivers can only gauge the physical distance represented by the time with practice and experience. Higher speeds necessitate greater distances between vehicles, as they will require more time to reach a full stop.

If you’ve been in a car accident due to tailgating, be sure to reach out to a car accident lawyer today. After a free evaluation, you can begin the process of seeking legal assistance to help you through this tough time.

Talk to an attorney about your case today.